India is in the process of improving its air quality. This is a much needed measure as 21 of the world’s 30 cities with the worst air pollution are in India. New Delhi has the poorest air quality among cities globally, with PM2.5 concentration levels nearly 10 times the WHO target.

Conventional wisdom considers air pollution an unavoidable by-product of economic growth, thus limiting the urgent response to it. Often, GDP per capita and growth rate are linked to emissions levels, one predicting the other. This has framed an understanding for many businesses that growth and good air quality are always in conflict, which has led to a perception that environmental regulations are a cost that holds back companies.

Clean Air Fund and Dalberg Advisors challenged this narrative by asking: how would solving air pollution benefit Indian businesses? Drawing upon big data analytics, a primary survey and existing literature, our report, Air pollution in India and the impact on business, illustrates how reducing air pollution will increase economic growth. It combines AI-based air pollution data with data on consumer footfall levels, employee traffic levels and business owner surveys to estimate business loss with greater accuracy and nuance than ever before. The results of this analysis indicates that there is a clear business case for clean air. 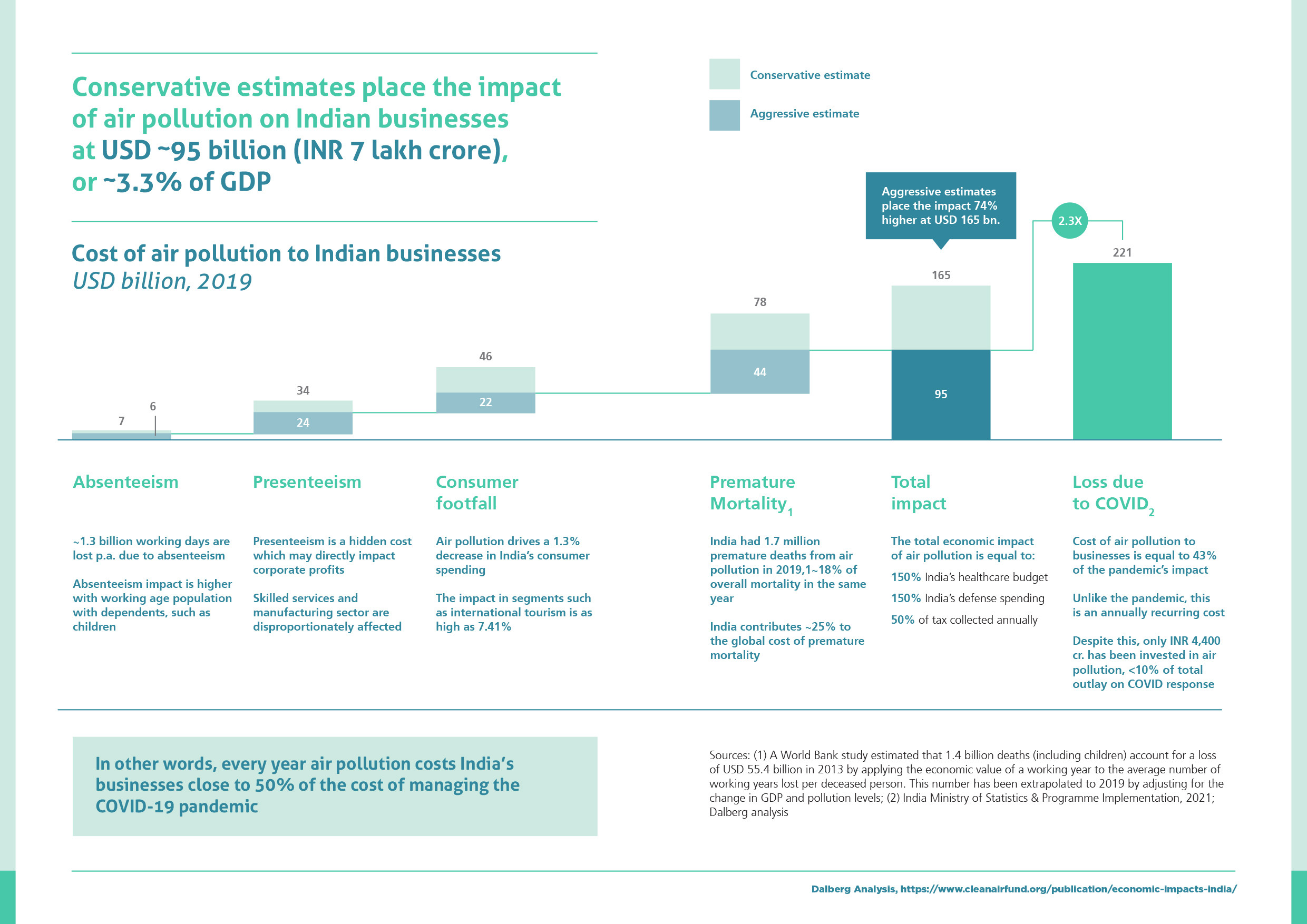 We found that if India had achieved safe air quality levels in 2019, its GDP would have increased by $95 billion, or 3%, as Indian businesses would face lower costs and higher revenues. This means there was potential to return a value equal to 50% of all tax collected annually, or 150% of India’s healthcare budget. Bringing clean air to India benefits the economy and businesses through lower absenteeism, higher on-the-job productivity, higher consumer footfall and lower premature mortality. 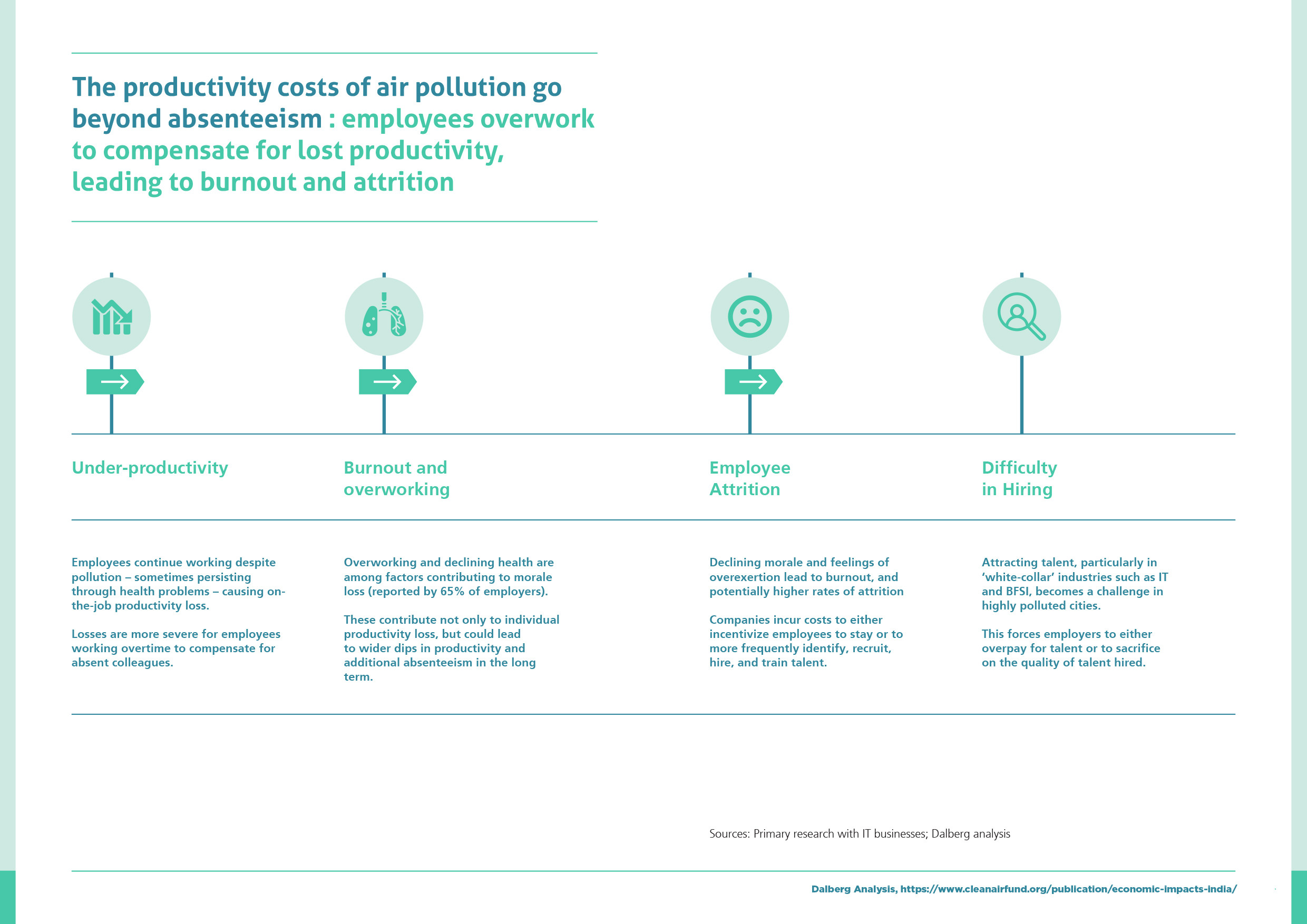 The analysis also shows that India could have gained 1.4 billion working days by decreasing air pollution related sick leaves in 2019, translating into $6 billion higher revenues for businesses. Caregivers, who typically bear the brunt of crises, disproportionately benefit from cleaner air (the elderly and children are more susceptible to air pollution) and would have more hours and resources to carry out productive activities. The cognitive and physical performance of employees would be boosted by cleaner air, adding $24 billion per year to Indian business revenues.

At current levels of pollution, employees must work overtime to compensate for their own lost output and that of their absent colleagues. Solving for air pollution therefore reduces cases of burn-out and potentially lower the rates of attrition, culminating in improved recruitment prospects for employers in formerly polluted Indian cities.

Solving air pollution would not just improve the internal operations of businesses, it would directly boost consumer spending. The analysis has found that when pollution levels spike, consumers tend to stay indoors to preserve their health. Bringing air quality up to safe levels in 2019 would have improved consumer footfall in commercial zones in Indian cities, unlocking $22 billion higher revenues for consumer-facing businesses. Discretionary categories, such as apparel and restaurants, stand to benefit most from cleaner air, as consumers are more likely to forego such purchases entirely rather than postpone them.

Most significantly, bringing air quality to safe levels could lead to 1.7 million fewer premature deaths, according to figures collected in 2019, thereby preventing 18% of all deaths within India. The corresponding potential benefit to the Indian economy amounts to $44 billion. Increasingly there is value to be created by tackling this silent pandemic in the years to come. As India’s average age rises from 27 in 2019 to 32 in 2030, the Indian population’s susceptibility to pollution will keep increasing, leading to higher potential gains from combating air pollution.

While the individual benefits of clean air, such as through lower absenteeism and higher consumer footfall are encouraging, their aggregated effect on cities and sectors is even more so. Delhi faces 275 days of unhealthy air. A study on a pharmacy chain in Delhi reveals the sale of respiratory medicines increase six-fold when PM2.5 levels cross 250ug/m2. Tackling air pollution would thus boost Delhi’s GDP by up to 6%. A 2019 survey reveals that 40% of the 17,000 respondents of Delhi would prefer to leave the city to preserve their health – and this trend would most likely be reversed were pollution to decrease.

The Indian IT sector, which accounts for 9% of GDP and is a key engine driving the growth of India’s service sector, stands to benefit by $1.3 billion, or 0.7% of its GDP, due to cleaner air, as this would result in lower absenteeism and higher productivity. In India’s capital alone, lower pollution would result in an IT company increasing its competitive advantage over a company in the Philippines by 33%.

The compellingly analysis shows that clean air is not just the backbone of healthy societies, but also of a thriving global economy and that there are huge gains to be unlocked by solving it. The relevance of the findings extends far beyond India, to policymakers and the international business community. Businesses would also do well to take note of what they stand to gain when they mobilize their resources to solving air pollution. After all, the analysis presents a compelling picture of how solving air pollution is healthy for the environment as well as the bottom-line.

While many businesses have signed on to national and global emissions targets, studies like these show there is room for the business communities to show a deeper commitment to accelerate action and ramp up their green ambitions by investing in clean tech.

The findings leave no excuse for inertia. The message is worth reiterating – clean air makes business sense.

This article was first published on World Economic Forum and is reprinted with permission.
A partnership with the World Economic Forum is in place to protect public health by mobilizing multi-stakeholder action on ambient air pollution. The Forum will build a cohort of leaders to catalyze corporate and political will; create a shared set of tools and facts for prioritizing actions; drive thought leadership; deliver concrete action as well as share lessons learned.

Clean air is good for business

We are working to make clean air a reality for everyone